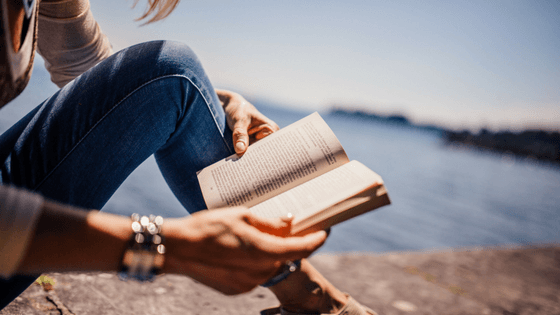 Autoimmune disease is undeniably on the rise and who does it affect most? Us ladies! This might not come as a shock, but what might surprise you is just how much your autoimmune disease can completely wreck your hormones. Autoimmune diseases that cause hair loss, brittle nails and worse seem designed to attack our femininity. In this post we are going to explore the autoimmune hormone connection and what this means for you.

What is an autoimmune disease?

Simply put — your immune system is confused and is attacking your body rather than the stuff it should be attacking (bacteria, viruses, parasites, etc).

Under normal conditions, your immune system is out surveying the land and tagging/flagging those proteins which are not “you.” But under certain conditions immune system gets it wrong and starts tagging the proteins that are definitely you for destruction.

Before we dive into the details, I want you to know this — Autoimmune Disease is reversible and remission is possible.

Personally, I’ve been able to reverse the symptoms of my own autoimmune diseases — autoimmune thyroid and adrenal disease.

Clinically, I’ve helped thousands of patients with all types of autoimmune conditions do the same!

Now let’s dive into how autoimmune disease develops and how it can absolutely cause hormone chaos in your body.

There is a recipe for developing Autoimmune Disease

The analogy I use with my patients is a recipe for autoimmune disease. The recipe has 3 ingredients — intestinal hyperpermeability (aka leaky gut), a triggering event and the right genes.

And this makes sense, right? Where is the best place to put the immune system to detect foreign invaders — the gut of course!

Since this is the place where the majority of the non-self proteins will enter, you want your immune system checking out the good, the bad and the ugly… and then handling that scene appropriately.

And it does this wonderfully. That is until the intestinal lining becomes compromised and the space between the cells of your intestine lose their integrity and start allowing large particles through.

Chronic stress, food sensitivities/ allergies, bacterial infections, parasites, viral infections, antibiotics, and some drugs (including NSAIDs) can cause a breakdown of your gut’s integrity at the cellular level.

This is how food sensitivities develop and is at the heart of autoimmune disease.

Food particles and infectious proteins from bacteria, yeast, viruses, and parasites begin entering the bloodstream and as you can imagine, your immune system is not happy about this. So it fights back.

Food particles escaping into the bloodstream alone can be enough to trigger an autoimmune disease.

Consider gluten as one example. When the gluten molecule enters, your immune system tags it with an antibody and signals for its destruction. This alone can increase inflammation, but it can also be the beginning of an autoimmune condition.

Gluten contains a protein called gliadin and that protein just happens to have an amino acid sequence that is close enough to your own thyroid gland. Yikes!

Your immune system sets out with good intentions to get rid of this non-self protein, but as it sets out to do its job ( your immune system is very diligent) and destroy the tagged protein, it gets confused and also attacks your thyroid.

This process is known as molecular mimicry and is a big reason why you should definitely ditch gluten if you have an autoimmune thyroid condition and really, any autoimmune condition. 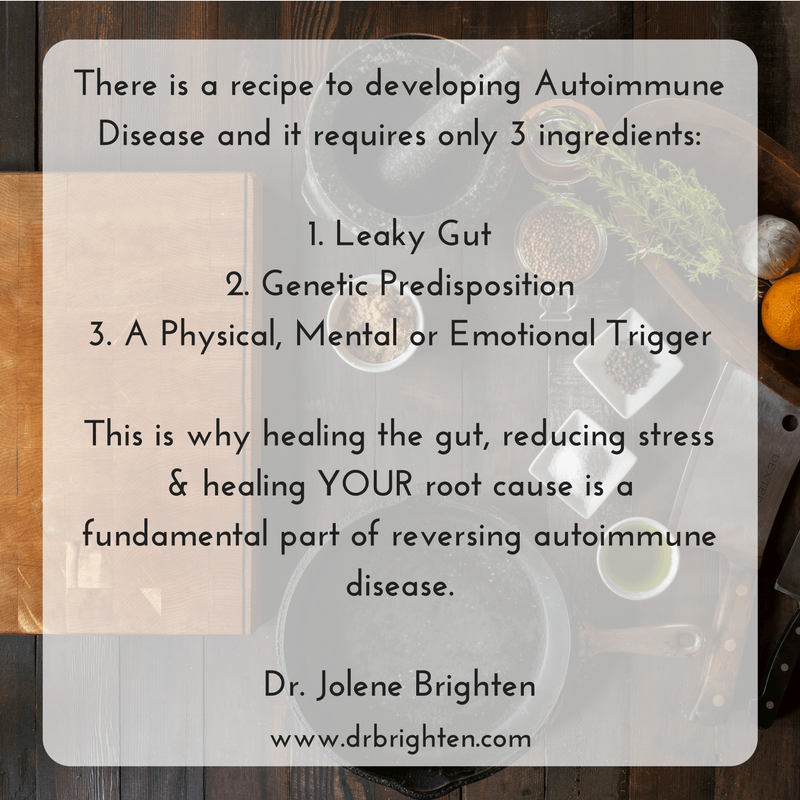 Infections are a definite culprit and often precede the onset of autoimmune disease.

Under normal conditions, your immune system would take these bad bugs down. Unfortunately, these infections are pretty smart and evading detection.

The immune system can once again get confused and begin attacking your body as it tries to clear the infection.

It’s a common trigger for many chronic disease, with autoimmune disease being no exception.

When stress is high, it is triggers a cascade of hormones that result in immune dysregulation. The alteration in immune system dysfunction is thought to ultimately lead to autoimmune disease and the rise in inflammation.

While we can’t definitively point to stress as “the cause” of autoimmune disease, one study in the Autoimmunity Reviews stated, “[..] many retrospective studies found that a high proportion (up to 80%) of patients reported uncommon emotional stress before disease onset.”

Approximately 1 in 12 women will develop an autoimmune thyroid condition after giving birth. Other autoimmune disease can also be triggered by childbirth, but thyroid disease is by far the most common.

Why is childbirth particularly special?

What your mama gave ya!

The genes… this is where a lot of people get hung up in health. Think of your genes more like a roadmap — they can determine which direction you go, but they aren’t in control of how you get there.

If you’ve got the genes for autoimmune disease or maybe you don’t know if you have the genes, but you have a family history of… let’s say rheumatoid arthritis for this example then here is how it might go.

So you have the genes for rheumatoid arthritis, but that doesn’t seal your fate. It tells us what might be coming down the pipeline and what you are risk for, but without the other 2 ingredients (trigger and leaky gut), you may never develop this disease.

Conversely, if you don’t have the genes for this disease, you aren’t likely to develop rheumatoid arthritis.

How Do Hormones Affect Autoimmune Disease?

The collection of glands that produce hormones is known as the endocrine system and it can be a prime target of autoimmune disease.

Your thyroid, adrenal, ovaries, testes, pancreas, pituitary and other glands and the hormones they make can be direct targets of the immune system.

Here are some of the common ways this can show up: 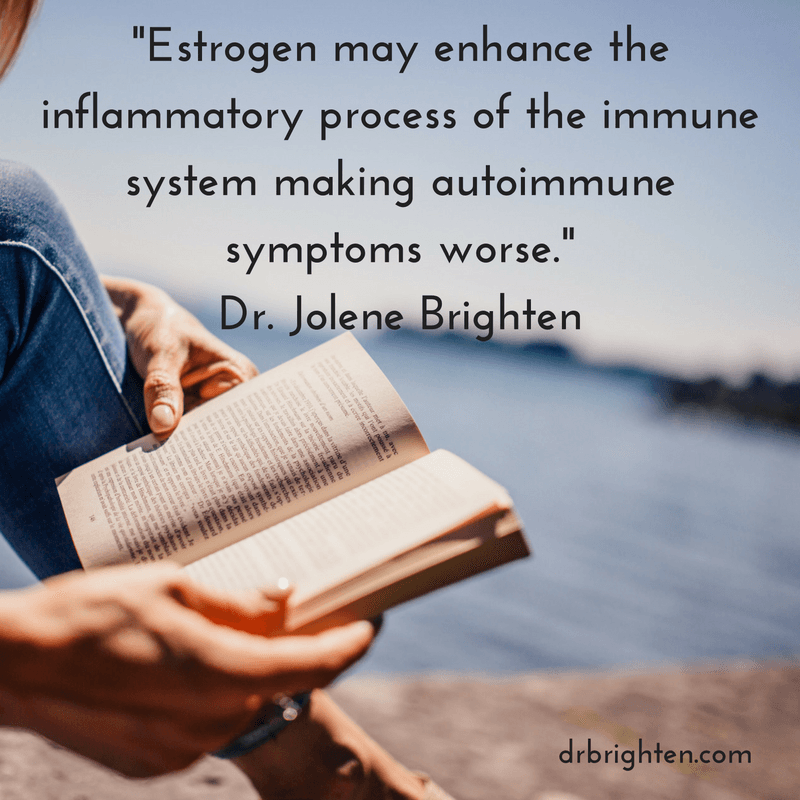 Your body can make antibodies directly against estrogen and progesterone too. When this occurs, women experience delayed ovulation or don’t ovulate. Their uterine lining may not develop during their cycle making pregnancy difficult to achieve, periods erratic or short and cycles may be extremely short or long.

And as you can imagine, insufficient hormones can lead to mood swings, increased irritability, feeling like anything will make you cry, experiencing depression or anxiety, and make you feel susceptible to stress.

As women, we are experience autoimmune disease at a higher rate than men. Gender alone puts us at higher risk. But why?

Current research is trying to answer this very question and understand why autoimmune disease seems to have a preference for women.

One current hypothesis is that the estrogen may actually enhance the inflammatory process of the immune system, meaning it could increase the number of antibodies attacking our tissues.

This is especially a concern in women who are experiencing estrogen dominance or excess estrogen.

And it is the spikes and dips of estrogen that can drive autoimmune disease wild in peri-menopause. Before the ovaries have called it quits to producing hormones, there are often many ups and downs in estrogen production. Most women experience these as hot flashes.

But for autoimmune women, these can be experienced as a flare in symptoms—sudden joint pain, hair loss, fatigue, changes in skin, and other symptoms.

Estrogen isn’t all bad, however. While the decline in estrogen accompanies a decline in immune function, there is also a level of immune dysfunction that can arise. This may be one of the reasons we see a rise in heart disease (which has a strong autoimmune component) in postmenopausal women.

So it would seem that it’s a bit of a Goldilocks situation — not too much, not too little, but just the right amount of estrogen is necessary for appropriate immune system regulation. For this reason, bioidentical hormone therapy should be considered on an individualized basis.

Your adrenal glands play a big role in immune health by modulating inflammation and regulating the immune cells via the hormone called cortisol.

Chronic stress, whether it be mental, physical or emotional, can disrupt the way your brain and adrenal glands talk. The Hypothalamic-Pituitary-Adrenal axis (HPA axis) is the mechanism by which your body regulates your cortisol output.

Disruption to the HPA axis has been shown to influence the rise in inflammation and autoimmune disease, including autoimmune thyroid disease (Hashimoto’s and Grave’s), multiple sclerosis, Sjogren’s syndrome, alopecia areata (hair loss), inflammatory bowel disease (Crohn’s and Ulcerative Colitis), and many more.

Downregulation of the HPA axis can result in lower cortisol output, but it is also possible to develop

Chronic stress can lead to glucocorticoid receptor resistance (GCR), a state in which the body becomes resistant to cortisol hormone. This is also commonly known as cortisol resistance.

In the early stages, there will be higher levels of circulating cortisol as the body fails to dampen the inflammatory response. The inflammation is allowed to progress, as is the autoimmune disease and cortisol levels plummet and the inflammation continues to climb.

There have been multiple studies linking stress, HPA axis dysregulation (commonly called adrenal fatigue) and autoimmune disease. Rheumatoid arthritis, which primarily affects the joints, multiple sclerosis, autoimmune thyroid disease, and autoimmune diabetes are but a handful of the autoimmune conditions linked to stress. 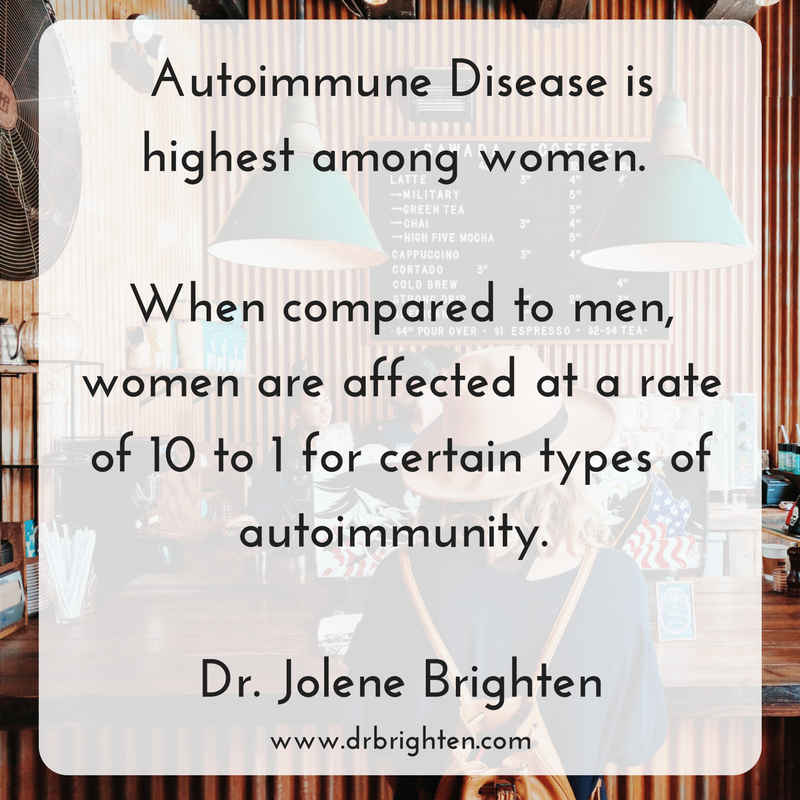 As we’ve already discussed, elevations in estrogen may drive inflammation and autoimmunity. But it doesn’t need to be a frank elevation of estrogen, it can be a relative state of estrogen dominance that contributes to immune dysregulation and many unwanted hormone symptoms.

Cortisol and progesterone share a common precursor hormone called pregnenolone. When stress, inflammation, or immune dysregulation is high, your body will preferentially make cortisol to try to dampen the inflammation. The result is elevated cortisol at the expense of progesterone.

Progesterone naturally opposes estrogen, or in other words, protects you from the harmful effects of estrogen. When progesterone dips estrogen is left unopposed and you experience what is called a relative estrogen dominance.

Now there is lots of cortisol trying to dampen inflammation and lots of estrogen trying to ramp it up. And to make matters worse, you might be resistant to that cortisol. The result? Inflammation climbs and autoimmune disease goes wild!

If you are experiencing symptoms any of the following symptoms, I recommend getting advanced lab testing and the help of an experienced hormone and autoimmune disease expert.

In my clinic, we use the Dutch hormone testing method, as it is the most advanced hormone testing available. The Dutch test offers the most extensive information of sex and adrenal hormones and helps us understand how your body is processing these hormones.

We also explore what your individual root cause may be through functional diagnostic testing, including:

If you are wanting to take a deeper look into how your hormones may be influencing your autoimmune disease or understand your risk for autoimmunity, I encourage you to contact my office today and learn more about our patient discount for Dutch testing . 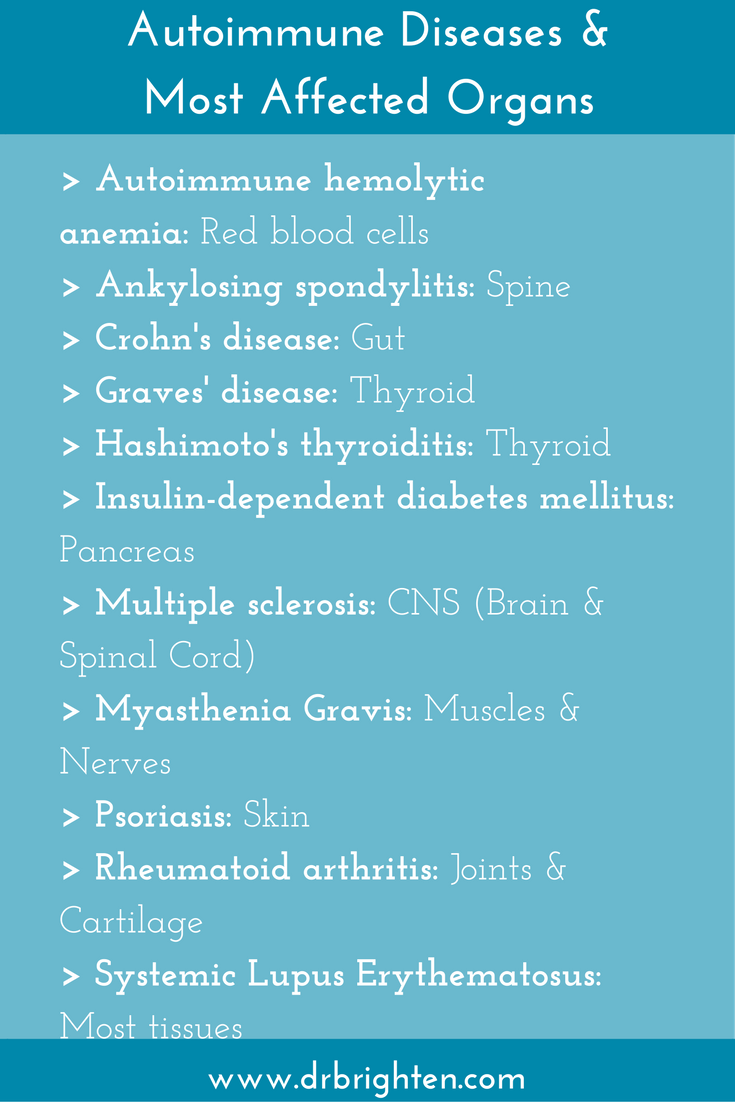