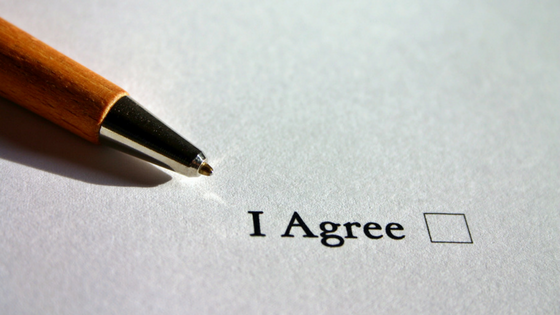 I've had the pleasure of speaking with Chris Kresser on more than one occasion about the serious state our health care is in and the role of Functional Medicine. Chris and I share similar views about the need for allied providers, like nutrition consultants and health coaches, in supporting those with chronic disease and the necessity of returning to a diet and lifestyle that is closer to our ancestors.

As we examine how conventional medicine developed, there is no denying it is absolutely an essential part of our health care model. However, we find ourselves in trouble when we attempt to solve a chronic medical condition within an acute medicine framework.

In his latest book, Unconventional​ ​Medicine:​ ​Join​ ​the​ ​Revolution​ ​to​ ​Reinvent Healthcare,​ ​Reverse​ ​Chronic​ ​Disease,​ ​and​ ​Create​ ​a​ ​Practice​ ​You​ ​Love,​ he proposes a bold solution to the chronic disease epidemic. If you're ready to be part of the movement that is changing health care then I highly recommend this new book. Please enjoy this Q&A with Chris Kresser.

We’re facing an epidemic of chronic disease unlike anything humans have ever experienced. It’s a slow-motion plague that is sabotaging our health, destroying our quality of life, shortening our lifespan, bankrupting our governments, and threatening the health of future generations. Although it may not match the scale of the bubonic plague in the Middle Ages in terms of mortality, it’s arguably an even bigger problem because of the sheer numbers of people affected and the wide range of those effects. I don’t think it’s an exaggeration to suggest that our very survival as a species is at stake.

Given this, it’s crucial that we embrace a new model of healthcare with the potential not only to stop the increase in chronic disease, but to reverse it. Unfortunately, conventional medicine has not only failed to address chronic disease, but it will never be able to achieve this goal—at least in its current configuration.

It’s no secret that our healthcare system is in trouble: countless books, media articles, and scientific studies have explored its many shortcomings in detail. They include misaligned incentives, broken payment models, conflicts of interest, Big Pharma influence, and bias and fraud in medical research.

These problems are real, and they demand attention. But as significant as the problems I’ve described are, there is a much more fundamental reason that conventional medicine is destined to fail with chronic disease—it’s the wrong tool for the job. Our system evolved during a time when the top three causes of death were pneumonia, typhoid, and tuberculosis, all acute, infectious diseases. Today, seven of the top 10 causes of death are chronic diseases. Conventional healthcare wasn’t designed for the challenge of chronic disease, which is why chronic disease continues to increase in prevalence each year.

Functional Medicine is an approach to medicine that addresses the underlying cause of disease, rather than just suppressing symptoms.

Imagine you’re in a boat, and the boat is leaking. You can bail water from the boat to make it sink more slowly, but if the leaks are still there, you’ll have limited success. Conventional medicine is mostly about trying to bail water out of the boat without fixing the leaks. Wouldn’t it make more sense to prevent the leaks from happening in the first place, and then fix them completely if they do occur? We might still need to bail some water initially, but if the leaks get fixed, the boat is steadied. Eventually, there’s no more bailing required, and the sailing—or living—can resume. That’s what Functional Medicine is all about.

Functional Medicine is different than conventional medicine in several key ways. These are summarized in the table below: 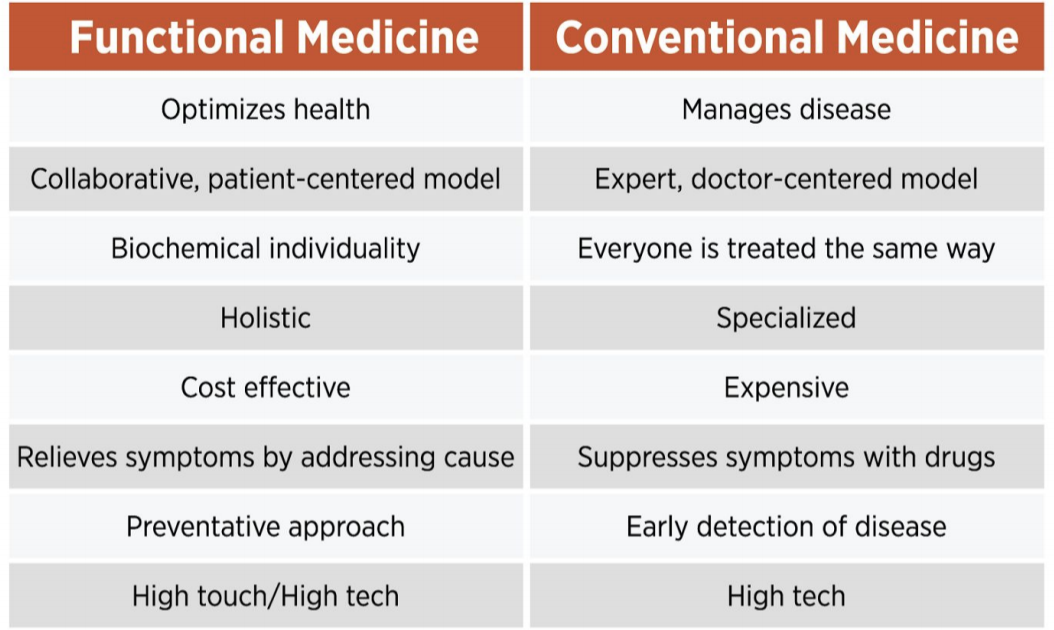 Let’s contrast the conventional and Functional Medicine approach to a common condition, irritable bowel syndrome (IBS), to make the distinction even more clear. In conventional medicine, all of the treatments for IBS are based on suppressing symptoms: analgesics for pain, pro-motility agents for constipation, anti-diarrheals for diarrhea or loose stools, and antidepressants for psychological comorbidities. Typically, the patient leaves the doctor with a handful of medications, all of which simply suppress symptoms without addressing the cause of her problem.

In a Functional Medicine approach, the doctor would start with the question: “What is causing the IBS in the first place?” The patient might have something called SIBO, or small intestinal bacterial overgrowth, which involves inappropriate growth of bacteria in the small intestine.

Maybe she has an undiagnosed food intolerance, or an undetected parasite infection. She might have a gut–brain axis problem caused by an autonomic nervous system issue, like sleep loss or stress. All of these mechanisms could contribute to IBS, and treating them can not only reduce the symptoms, but it can also reverse the condition entirely in some cases. This is the promise of Functional Medicine.

The ancestral diet and lifestyle is based on the premise that we must bring our environment into closer alignment with our genes to thrive. When we do this, we are naturally healthy and vital and resistant to chronic disease.

Let’s look more specifically at diet. For 77,000 generations, the human diet consisted primarily of meat and fish, some wild fruits and vegetables, nuts and seeds, and some starchy plants, which varied regionally. All of those are whole foods. They’re nutrient-dense. They’re packed with micronutrients, vitamins and minerals, and antioxidants, and they’re relatively low in calories. Most of these foods contain high amounts of water and fiber, which makes us feel full when we eat them.

We now know that 85 percent of the risk of chronic disease is environmental, not genetic. This means that changing our diet, behavior, and lifestyle is the single most important step we can take to reverse chronic disease. Despite this, our medical model is not set up to support patients in making these important changes. It is overwhelmingly focused on managing disease after it occurs, using drugs and sometimes surgery, rather than preventing and reversing it.

Doctors are not the answer. The latest statistics show that we’ll have a shortage of 52,000 primary care physicians by the year 2025. But even if we didn’t have a shortage of doctors, most of them have neither the training nor the time necessary to support people in making lasting behavioral changes. We could start training doctors and other healthcare providers in this area, but that still wouldn’t solve the problem. Our “sickcare” system is not set up to deliver this type of care.

The average visit with a primary care provider (PCP) in the United States lasts for just 10 to 12 minutes, with newer doctors spending as little as eight minutes with patients. It is impossible to deliver high-quality care in eight to 12 minutes when a patient has multiple chronic health problems, is taking several medications, and presents with new symptoms. Such brief appointments leave little to no time to dig into the important diet, lifestyle, and behavioral issues that are causing the patient’s symptoms.

That’s where health coaches come in. Coaches are trained in a number of disciplines that support people in making lasting change. These include (but aren’t limited to):

Coaches are also trained to work with patients in a more collaborative way, rather than with the expert approach that is common in medicine. In the expert approach, the “authority” assesses the problem, delivers advice, recommends solutions, and in some cases, teaches new skills. In the collaborative approach, the coach acts as a partner or ally, encourages clients to discover their own solutions and become their own advocate, and supports them in developing the skills they need to embrace new behaviors.

I’m not suggesting that we give up on conventional medicine, but rather that we use it where it’s most effective—for acute, trauma, and emergency care—and not rely on it for the prevention and treatment of chronic disease. The best way to address chronic disease is with Functional Medicine, an ancestral diet and lifestyle, and a collaborative practice model that uses health coaches and other allied providers to provide more support and a higher level of care to patients. We owe this to ourselves, and to our children.

Chris Kresser is the author of Unconventional​ ​Medicine:​ ​Join​ ​the​ ​Revolution​ ​to​ ​Reinvent Healthcare,​ ​Reverse​ ​Chronic​ ​Disease,​ ​and​ ​Create​ ​a​ ​Practice​ ​You​ ​Love,​ a book for healthcare practitioners and the general public that proposes a bold solution to the chronic disease epidemic. He is also the founder of Kresser Institute, an organization that trains healthcare practitioners in applying Functional Medicine and an ancestral diet and lifestyle in their practices; the creator of ChrisKresser.com (one of the top natural health websites in the world); and the New York Times best-selling author of The Paleo Cure.