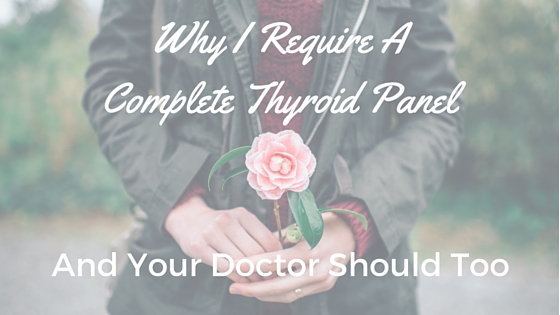 Thyroid Stimulating Hormone or TSH is a pretty standard blood test to run to assess overall thyroid health. In fact, running TSH on its own is pretty normal in many conventional doctor’s offices and some Naturopathic and Functional Medicine as well.

Sure, an out of range TSH is a clear indication that something is going on with your thyroid, but unfortunately, it’s not the whole picture. In fact, your TSH can read as “normal” and all the while, hypothyroidism or even autoimmunity can still be lurking underneath.

Download a copy of Your Hypothyroid Guide. Learn how to improve your energy, lose weight & elevate your mood!

We already know that the “normal” range for TSH has been widened to reflect an already sick population and there have been several studies calling for a more narrow range. This means that while a “functional” or optimal TSH range is about 1-2, with upper limits being about 2.5, the conventional range goes all the way up to 5.0 (which is pretty high, indicating hypothyroidism).

But there’s another problem with testing TSH by itself. TSH as a pituitary measurement alone does not indicate the response of the thyroid to the pituitary signal or the ability of the body to convert T4 to the active T3 hormone.

On top of that, autoimmune thyroiditis is found in about 90% of hypothyroid patients. And an autoimmune disease is treated differently than hypothyroidism alone.

90% of hypothyroidism is due to an autoimmune disease. Get tested & find the root cause! Click To Tweet

It’s important to test for antibodies as they are predictive of the disease, meaning they can show up years before enough thyroid tissue has been destroyed to render you hypothyroid, aka presenting with symptoms. Furthermore, Hashimoto's (autoimmune hypothyroid disease) is associated with upwards of a 14% increased risk of developing other autoimmune conditions.

So, confirming that you do or do not have Hashimoto’s as opposed to hypothyroid alone is important because: a) those two conditions are treated differently and b) an actual autoimmune diagnosis is an indicator that you may need to test for other autoimmune antibodies.

Getting a full thyroid panel done ensures that we do not miss a disease in its early stages. If your chief concern is fatigue, depression, and anxiety— all of these symptoms warrant a full examination of the thyroid. It is well established that these symptoms can be a manifestation of thyroid disease.

What does a full thyroid lab workup look like? Watch this video I’ve made just for you! And download the list of labs I recommend for women who suspect or have thyroid disease.